Howlin’ Wolf – Howlin’ the Blues, The Story of a Blues Giant 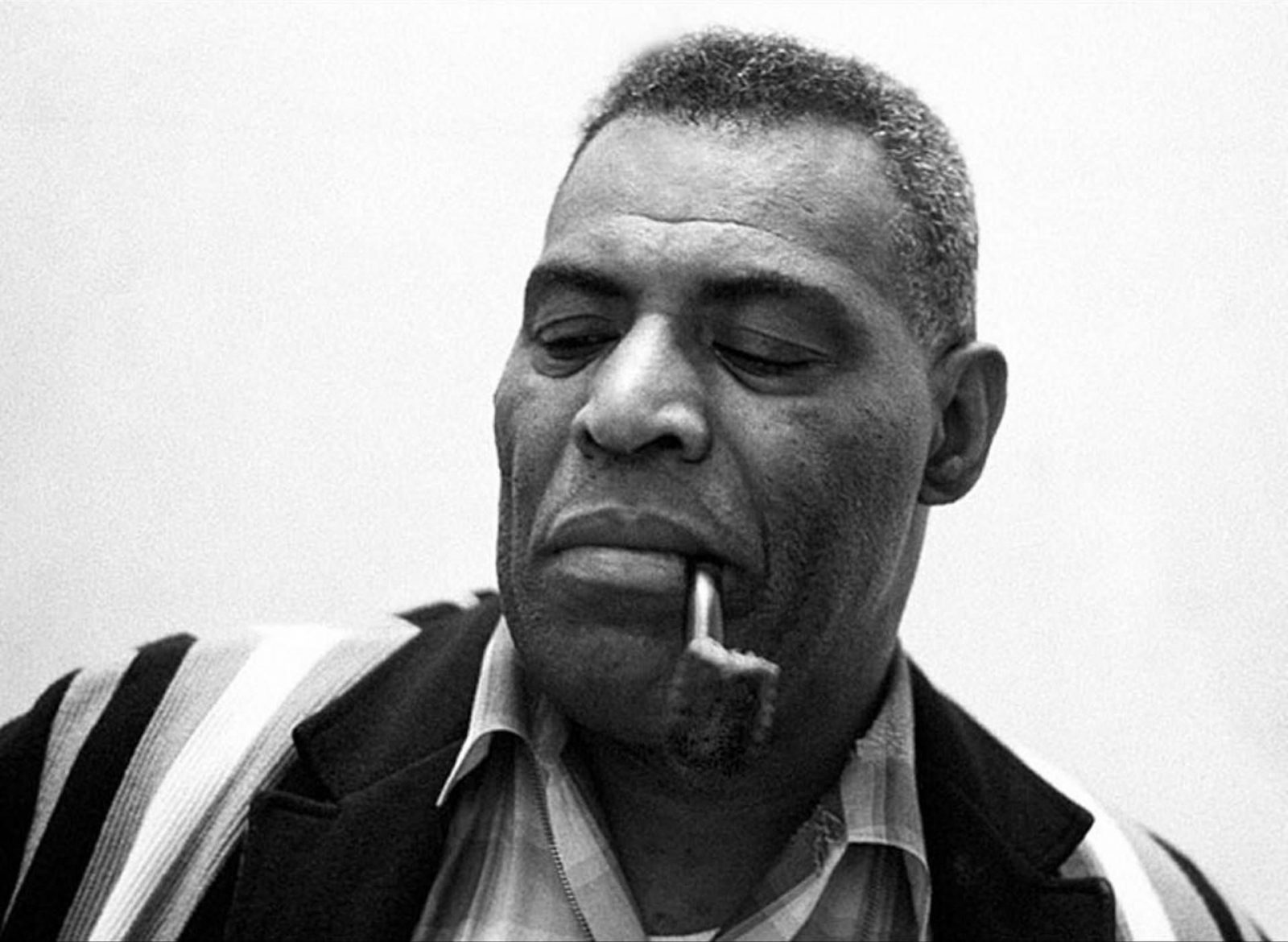 Birth of a Legend

It’s impossible to guess what the blues might’ve sounded like, had there never been a Howlin’ Wolf – that mountain of a man, with a voice like a thunder-crack, a sulphur-throated force of nature whose bone-rattling voice screeching tales of betrayal, loneliness and death at fans whom he stared at bug-eyed and sweaty as he howled. With the crack musicians he hired, he broke the basic chords down, tunneling into their roots, bursting them apart and finding strange charms in them that few musicians had explored previously.

But before he became giant of the blues he’d have to walk the walk towards stardom and earn the hard way the right to stand among the most influential, the most recognized and the most emotional artists of our time.

Born June 10th, 1910 and in a plantation close to the small town of White Station, Mississippi with the name Chester Arthur Burnett.
An unmistakable character even before his fame; Wolf was a big, imposing man – towering at just shy of 6 feet 3 inches, with an equally striking voice. His trademark hoarse growl has influenced countless of aspiring and well renowned singers, but has remained incomparable.

“I couldn’t do no yodeling,” the Wolf said. “So I turned to growlin’, and the howlin’, and it’s done me just fine.”

At just a year old his parents separate, and as a little child is left thrown out of the house by his mother for apparently being disinterested in helping around the house and the farm. After wandering the streets for a little while, his great-uncle took him under his wing, but what an unloving wing it was. The baptist preacher uncle treated him so harshly that young Chester ran away at the age of 13 and once again found himself homeless. This time though, instead of waiting around for someone to save him, he took the matter into his own hands (feet rather) and walked 85 miles barefoot, finally arriving at his father’s home down at the Delta where he found the big loving family he’s longed for. Reunited with a loving parent, half-sister and step-siblings, Wolf could at last focus on what was truly fascinating him – the blues.

Where his home was, by the town of Ruleville, there were already some blues stars – most notably the founder of the Delta blues Charley Patton, Wolf’s idol and greatest influence. When his father gave him his first guitar at age 18, he also somehow convinced Patton to be his tutor. His large hands were more suited for farming than the guitar as his teacher noted, but this doesn’t stop his passion for the blues to shine.

“Patton started me off playing,” Wolf told writer Pete Welding. “He showed me things on the guitar .When he played his guitar, he would turn it over backwards and forwards, and throw it around over his shoulders, between his legs, throw it up in the sky,”

He continued practicing with the rural masters, among which his half-sister’s (alleged) husband, harmonica player Sonny Boy Williamson (Rice Miller) from who he learned the instrument. All was going well for Howlin’ Wolf before being abruptly interrupted by his Army duty. Anyway, four years and a nervous breakdown later, he returned to the farm life in Ruleville, where he simultaneously helped out his dad and played at local joints.
Not nearly satisfied with the development of his music career, he started traveling and became a street performer at first, then founded his own band, but after that he got himself a radio gig, steadily becoming a fairly well known radio personality. It was this exposure to the mass public that got him the attention of the legendary producer Sam Phillips.

“This is for me,” Phillips famously said. “This is where the soul of man never dies.”

Ike Turner was scouting for Philips’ Sun Records in 1951. Turner heard Wolf performing on the radio and immediately contacted him. And just like that, almost through sheer luck if it wasn’t for Wolf’s immense talent and perseverance, he got himself his big shot. His career was launched with a head start – Wolf recorded for Sun Records, and then some of these masters were leased to Chess Records in Chicago. After his first big hit “Moanin’ at Midnight”, he moved to Chicago in the winter of 1953 where he officially signed a record deal with Chess Records. His departure from Memphis Wolf would later describe glamorously –

As tough a boss as Wolf could be, he was protective of his band, and Hubert in particular. Unlike Muddy Waters, who had a closer, more amiable relationship with Leonard Chess, Wolf was known to lock horns with the label. Deeply suspicious as a result of his vicious upbringing, and standing 6’6” and 300 pounds, the Wolf could be a fearsome and intimidating man. “If you said something to him,” Hubert laughs, “you better be right.”

Year after year Wolf was taking over the charts with hits like “Evil”, “Smokestack Lightnin’.” and “Killing Floor”. He was at the top of his game and had a star status in Chicago as well as wherever else he played. By 1960, Wolf was “assigned” with the Chess records writer Willie Dixon. For half a decade after that, he would record only songs written by Dixon. They – along with the great guitarist Hubert Sumlin – the Cheese to Wolf’s Mac, became a huge success nationwide.

Throughout the 50’s and the early 60’s they’d even tour Europe on the regular, with “Smokestack Lightnin’“ becoming a hit in England 8 years after its initial release. Almost every great record to Howlin’ Wolf’s name was written by Willie Dixon – “I Ain’t Superstitious,” “The Red Rooster,” “Shake for Me,” “Back Door Man,” “Spoonful,” and “Wang Dang Doodle,” to name a few. But before standing the test of time and becoming true classics, they stood an even greater test – that of the rock bands covering whatever they could put their hands on. Such was the case of The Rolling Stones. Their cover of “The Red Rooster” was a #1 record in England. The Stones had an enormous respect for Wolf which he never forgot and undoubtedly reciprocated.

Asked about how he feel about the young British and American bands covering his songs he replied:

“Well I’ll tell you, there’s nothing wrong with that. I want all of them to make my records, because I gets money out of it, see,” Wolf explained. “It doesn’t matter no different who sang your song. They sang because of the way they feel. Don’t never take and try to change a musician when he does something. Let him play the chords the way he feel.” (All interview rights reserved by the Arhoolie Foundation)

In 1964 Willie Dixon and Wolf parted ways, and he had to go back to writing his own songs. Not that it was hard for him. One of the most recognized records of that period is “Killing Floor” featuring an amazing guitar riff from Hubert Sumlin.Sumlin is probably the only musician to stay with the Wolf for a long period of time, and Gural­nick describes their friendship as “locked forever in a love-hate, affection-spite, typical father and son relationship. Perhaps it is this closeness that made their music so sympathetic, so hard to sepa­rate.”

“Wolf and I had some tremendous fights. He knocked my teeth out, and I knocked his out.”

His economical, stinging fills, unusual rhythmic approach and perfectly placed bent notes are as integral as Wolf’s growl. When asked about how he developed his trademark sound he replied: 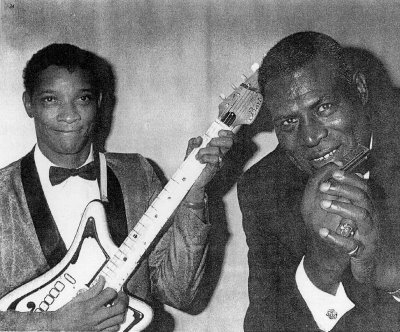 Hubert Sumlin and Howlin’ Wolf together

I had played with a pick for eight or nine years, and I couldn’t put it down. Then I woke up one morning and started playing without a pick, and the first thing I thought of was “Smokestack Lightnin.’ ” I played it better than I ever had and realized, I don’t need no pick. I don’t need anything but my fingers. And that was it. I started playing with a lot more soul. I never used a pick again. That was my secret to unlocking everything. My tone, my sound, everything happened right then. People can’t understand how I play. The average guitar player don’t know what I’m doing. But it’s my thing. It’s what God gave me; I don’t need a pick because I got five fingers. How can one pick compete?

Some would say that riff was so amazing, that Led Zeppelin put it to their name for one of their early albums. Wolf pertained his intense performing style that was no match for singers half his age, and showed up for gigs in small clubs that many renowned bluesmen had already abandoned. Not Wolf. He said simply,

“I sing for the people.”

In the same year – 1964, Wolf also married his long-time sweetheart, Lillie Handley. They’d met in 1957 in a Chicago nightclub and he called her “a flower from the first day I met her”. Unlike his on-stage persona, Wolf was a hard-working, responsible, middle-class family man in his personal life. He was a fisherman and a hunter, owned farmland in Arkansas, offered his services as a volunteer at the local fire department.

By the end of the 60’s, Wolf’s hits were being covered by the likes of the Doors, Cream, Grateful Dead and Jeff Beck and was leaving lasting impressions on the emerging generation: John Fogerty was nine when he first heard Howlin’ Wolf’s sandpaper voice on the radio.

“It was just so powerful, and so mystical and spooky,”

and the legend B.B. King talked about him:  “I’m tellin’ you, I ain’t never heard nobody sing like him. It was so good … I almost cried. .. . that something that seemed to be like a sword that’d just pierce your soul when he’d sing.”. Tom Waits, also borrowed his vocal style in large part from Wolf.

The time went by, the 70’s moved on, and Howlin’ Wolf’s health was spiraling downward.Suffering from kidney disease, and having suffered several heart attacks, Wolf kept on recording and performing. The London Howlin’ Wolf Sessions album (which became his best selling record), recorded at London’s Olympic Studios, for example, saw him taking dialysis treatments in the studio between takes. Wolf’s last performance was in November 1975 at the Chicago Amphitheater. Sharing the scene with B.B. King, Albert King, O. V. Wright, Luther Allison, Wolf gave an unforgettable performance, rising quite literally from his deathbed to share his songs with the people for which he always sang. The crowd was ecstatic and gave him a well deserved standing ovation. Once he got offstage, a team of paramedic had revive him. Wolf passed away on January 10th that year.
It’s no exaggeration to say people were devastated. A life-size statue of him was built in Chicago, in 1980 he was inducted into the Blues Foundation Hall of Fame and in 1991 – into the Rock and Roll Hall of Fame. His legacy will live on as long as there’s blues. Never will there be another artist with such a passion for the music, such love for the people and a voice so memorable you could hear it right now. Happy birthday, Wolf. Thank you!

You can find some of the great Howlin’ Wolf tracks and many more in my new Spotify playlist dedicated to the Electric Blues Giants: