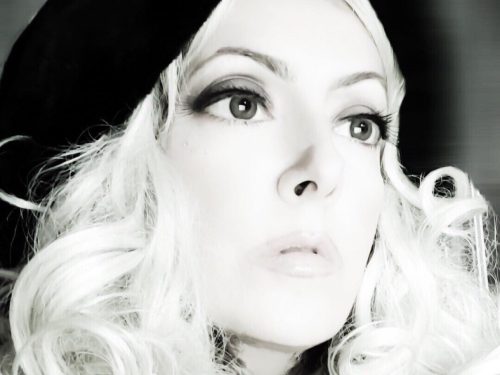 Born in Sassari on the island of Sardinia, Eva Carboni is a singer, musician, writer, and fine artist. She studied at the prestigious Vocal Power Academy in Los Angeles, graduating in singing with the renowned vocal coach Elisabeth Howard, who has also coached the likes of Sting and Lionel Richie. Although blues music is Eva’s first passion, she is a versatile singer who has worked in a number of styles including Jazz, R&B, Rock, and Musical Theatre. Over the past few years she has performed with musicians such as Buddy Guy, Mario Schillirò, Zucchero, Derek Wilson, Kevin Welch, Marco Mendoza, Sergio Caputo, Frank McComb, and Vic Martin (Gary Moore). Eva is the co-founder and artistic director of the popular Birdland Jazz Club in Sardinia, where she regularly hosts live shows and events. In 2017 she was guest vocalist on the track ‘River Of Life’ by bluesrock guitarist, Mick Simpson, and featured on his album ‘Black Rain’, which received airplay from Paul Jones (BBC Radio 2).
In 2019 Eva recorded and released her debut solo album titled ‘Italia Square’, which was produced by songwriter, Andy Littlewood, and includes contributions by a host of top musician’s including Giovanni Bruno, Mick Simpson, Pete Nelson, Andrius Linsdell, and Bob Steves. The 14-track album received rave reviews and worldwide radio airplay, with one of the more popular songs, ‘Love Me Tonight’, hitting close to a million views on You Tube. The gospel-tinged ballad, ’New Day Calling’, was licensed for use in the soundtrack of the forthcoming movie, ’Distant Sun’.
Following the success of Italia Square, Eva is now back in the studio working on her second album that is due for release in summer 2021.