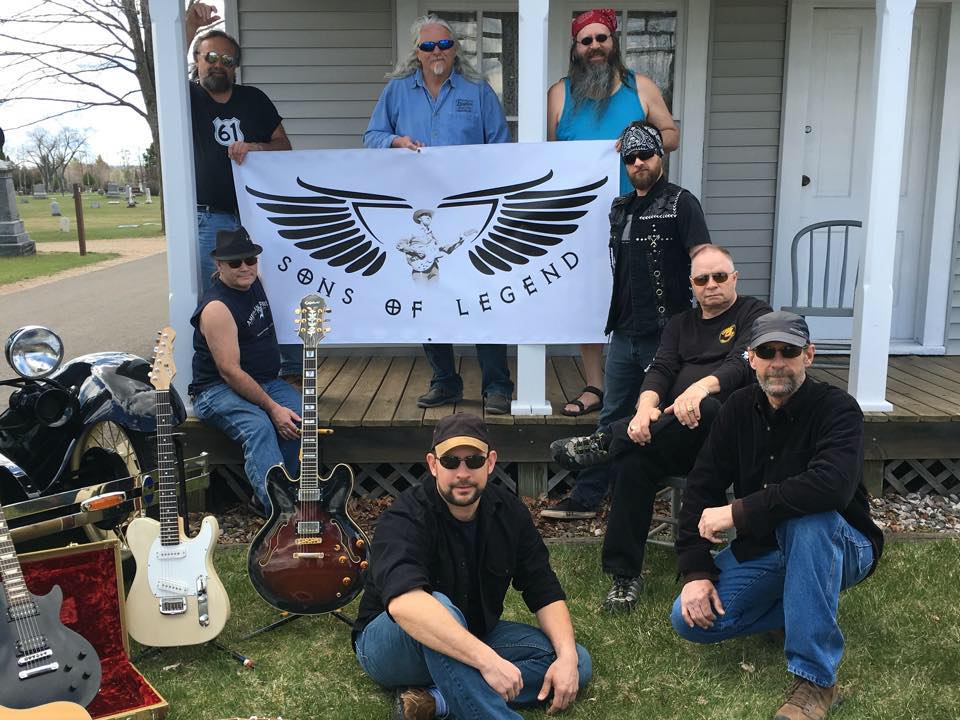 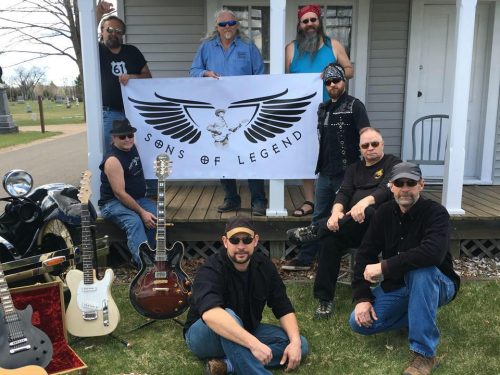 Sons of Legend gets its name from the sons, Jay and Harley, Jr.  of Harley Davis, Sr, of Harley and the Country Boys fame, a popular local band from years gone past. Harley Sr’s. nickname was “The Legend.”

Sons of Legend features: The lead guitars of Jay Davis and Chris West, the rhythm guitar of Harley Davis, Jr; the rock-solid rhythm section of Kirk Atanasoff on drums and Russ Fennick on bass, with gritty lead vocals by Jay. Sons of Legend has been together since 2014.

Sons of Legend is influenced heavily by the blues, as well as hard rock/metal, southern rock and outlaw country, thanks to The Legend, Harley Sr. The combination of these influences as well as the diversity of the musicians that make up Sons of Legend produces a raucous yet fluent merging of those styles into something uniquely called Sons of Legend.

In May of 2018, Sons of Legend’s debut full length album “Back From Gone” was released. It is comprised of 10 original songs ranging from straight up 12 bar blues songs, to blues rockers and also a blues laden power ballad. Three songs from the album garnered the band Crowd Picks Featured Artist slots on the music promotion website ReverbNation.

In May of 2022, Sons of Legend released its second full length album “Dirty Guitar Blues.” The 10 original songs are a mix of blues, blues-based rock and rock and roll.

Both albums are distributed by CD Baby through Amazon Music as well as online on Spotify, Amazon, YouTube Music, iHeart Radio, Deezer, iTunes, Soundcloud and many more digital streaming and downloading platforms.  Sons of Legend’s songs can also be found on the AMI Jukebox network. Not many “local” bands can make that claim.

Local Radio station WIKB 99.1 in Iron River, MI has our songs in regular rotation on their “Drive at 5” radio program. We can also be heard online at The Garage-Northwoods Online Radio, The Global Blues Radio network and on the Blues Monday Monthly Radio Jukebox.

Sons of Legend has also performed at numerous biker rallies (both private and open to the public) and veteran events honoring our military heroes. They have also donated their performance time to worthy fund raising causes such as the American Cancer Society’s Relay for Life several years in a row in Amasa, MI. They have also performed at several bars, festivals, and clubs throughout Northern and Central Wisconsin and the Upper Peninsula of Michigan. The 2020 schedule was to include many more places, but was unfortunately cut short due to the covid pandemic. Instead, the band concentrated on writing new songs for their album.

In 2021, with Covid restrictions allowing, Sons of Legend returned to playing live music once again at several repeat venues such as two shows at The Pines in Mercer, WI, the Bergland Bay Bar in Bergland, MI and the Alpha, MI 4th of July celebration hosted by the Alpha Brewery. Sons of Legend also entertained new fans at new venues such as the Vilas County Fair in Eagle River, WI and The Rustic Bar in Athelstane, WI. 2022 saw a light schedule, but with repeat performances at The Rustic Bar, as well as returning to the Gateway Lodge in Land O’ Lakes, WI

Sons of Legend members Russ and Jay performed in another band called Red, White & Blues together from 2006 to 2011. Red, White & Blues performed at the Marquette Area Blues Festival twice, as well as the Great Northern Blues Café Festival twice, LZ Lambeau, the Grand Marais Music & Arts Festival, and was slated to co-headline at the Watseki (Illinois) Blues Festival until the power went out due to an unexpected windstorm. (There is a story worthy of the blues right there!)

With years of experience under their belts, and having performed at numerous festivals, community events and local bars in the U.P. of Michigan and Wisconsin, the members of Sons of Legend put on a musical performance copied by none.