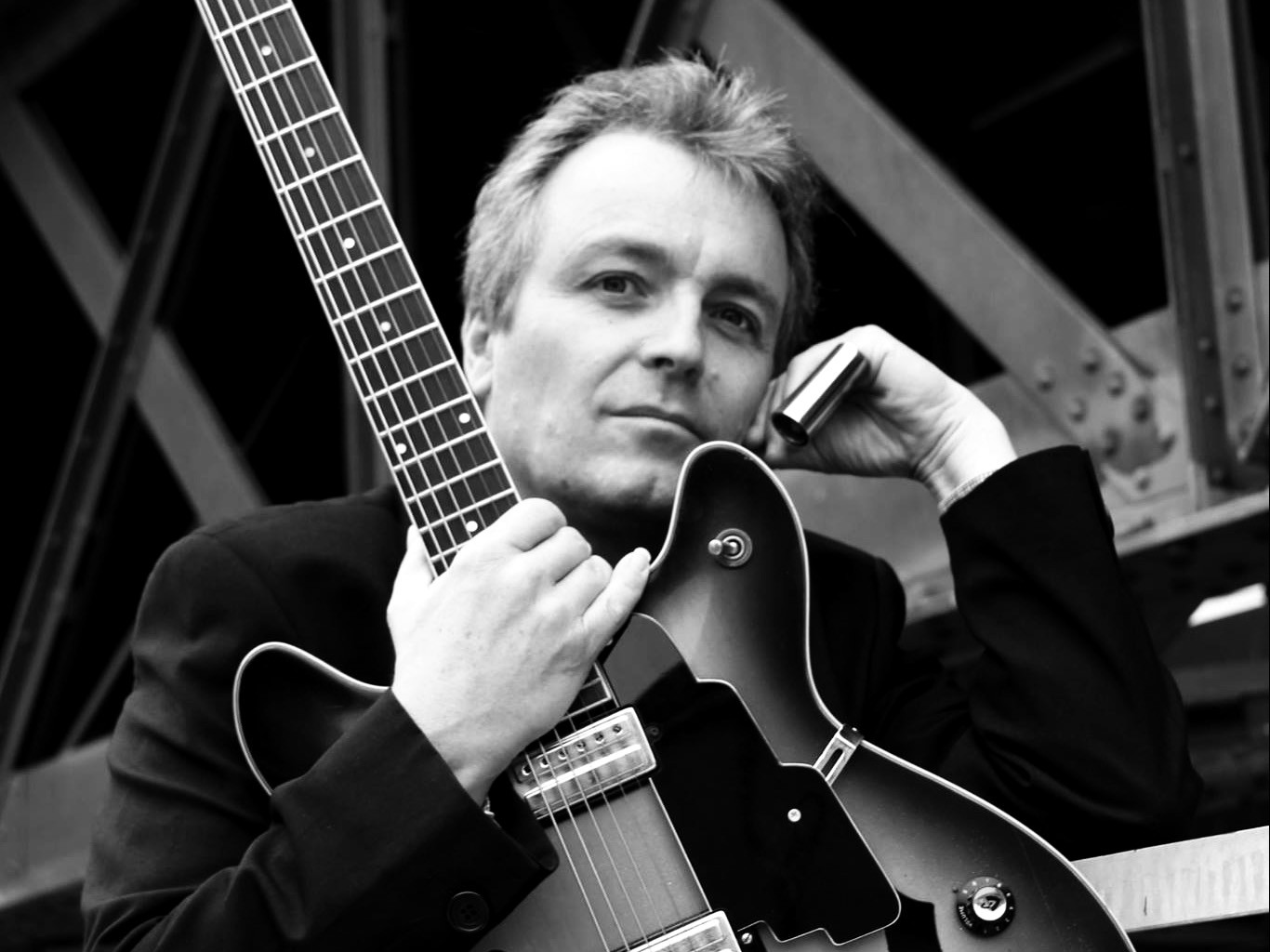 Richard Koechli (1962) is a independent roots artist from Switzerland. He has played with well known artists such as Larry Garner («I’ll never forget your slide-guitar!»), Greg Koch (“Koechli plays great, and he’s a very nice guy”), Philipp Fankhauser (“he’s the only one of the roots & blues guys in Switzerland able to lay it sooo far back until it gets that very particular J.J. Cale kinda feel“), Lilly Martin, Jens Krüger and many more. Richard has released 8 albums under his own name, he won the SWISS BLUES AWARD 2013 and the SWISS FILM AWARD 2014 (best soundtrack), and he is known for successful guitar-books released under the german publisher AMA-Verlag (one of them, ‘Masters of Blues Guitar’, won the BEST GERMAN EDITION 2011) and for music-historical german novels (tredition-Verlag).

In 1997, Koechli released his first (instrumental) album’ Envole-toi’. In 2002, he had the creative vision to combine Celtic-Folkmusic with the Blues – and went on to produce the album ‘Blue Celtic Mystery’. «He takes the myths of our lands and adds music that retains a hint of the ancient but is truly 21st century in style. He concocts new tales for our timeless times!» (Nicky Rossiter, www.rambles.net).

Koechli was a guitarist and instrumental-composer for a long time, but now he definitely seems to be on his way as a Singer-Songwriter. Together with his solid and brilliant backup-band, the Blue Roots Company, Koechli recorded the album ‘laid-back’ in 2008. This album presents Richard in his best Singer-Songwriter manner and as a master of Slide guitar. Roots music at its finest, in two languages (French and English). Koechli puts together the spirit of all his inspirations: from Blind Willie Johnson, Fred Mc Dowell and Elmore James to Hank Williams, Bob Dylan, Neil Young, from Gary Rafferty, Zachary Richard, Eric Clapton and Randy Newman to … his biggest influences: the laid-back-Masters J.J. Cale and Mark Knopfler.

Between 2008 and 2010, Koechli played more than 200 club-gigs in Switzerland and wrote his award-winning book ‘Masters of Blues Guitar’. In 2011 it was the right time to follow his Blues-roots and produce two real Blues-albums, dedicated to the pioneers of Afro-American Folk Blues: ‘Howlin’ with the bad boys’ (2011) and ‘Still howlin’ (live, 2013). «Brilliantly delivered original compositions, deeply rooted in traditional blues – Richard Koechli bows before the legends and gets every blues-loving soul moving» (Guido Schmidt, Founder of Lucerne Blues Festival). Koechli won the SWISS BLUES AWARD 2013 and the SWISS FILM AWARD 2014 (best soundtrack), produced the jubilee-song ‘Lucerne is a Blues Town’ for the 20th Lucerne Blues Festival 2014, where he played on the main stage. 2015 he released a double-album (‘Searching for the Blues’, solo concert-recording and soundtracks) – and finally published his first music-historical german novel ‘Dem Blues auf den Fersen’ (tredition). 2016 and 2017, he released the new guitar-book ‘Die etwas andere Gitarrenschule’ (tredition), the music-audiobook ‘Dem Blues auf den Fersen’, the single ‘Six String Spell’ (dedicated to Mark Knopfler) and the world’s first Tampa Red-biography ‘Der vergessene König des Blues – Tampa Red’ (tredition).

In 2018, the time was ripe to unite all its previous influences: 80 minutes of finest Roots-Music with footprints of Blues, Soul, Folk, Country, Jazz and Rock. With his new album «Parcours» Richard Koechli puts everything on the table that counts: Passion, depth, fragility, gratitude. A seductive balance of rhythmic contrasts, melodiousness and relaxed unobtrusiveness holds everything together – in a way that reminds us of Laidback masters such as J. J. Cale. 16 new original songs about the values of life; a wonderfully dynamic and creative band (’The Blue Roots Company’), some special guests – and Koechli‘s voice, which has found its home somewhere between intimate Folk singing and soulful Blues power.

On Richard Koechli’s current record, he respectfully and idiosyncratically interprets 10 of Cale’s immortal songs; «The Real Chill, Remembering J.J. Cale», a very personal album that brings the master’s splendours to new life without betraying their basic spirit. This release seems to hit the mark; the reviews are very enthusiastic and the album reached the Blues Top-10 in UK and in France. Actually Koechli is working on the new album «Holy Blues» (again including a book), on which he deals with the connection between gospel and blues.

Richard Koechli lives in Switzerland and France, where he plays regularly solo and with The Blue Roots Company in clubs and on festival stages.