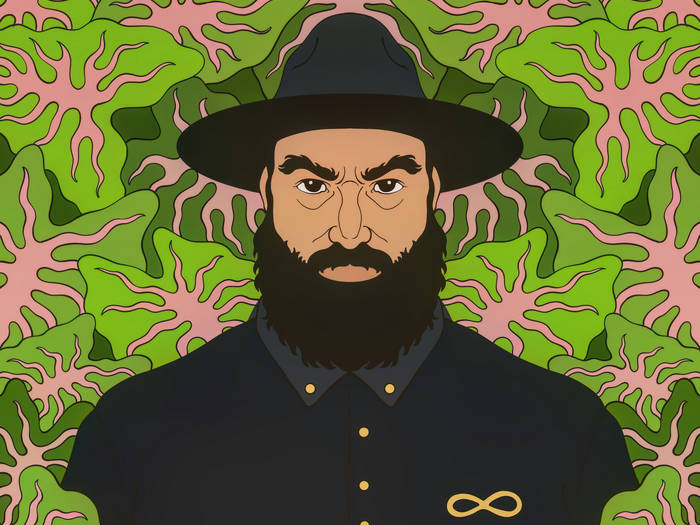 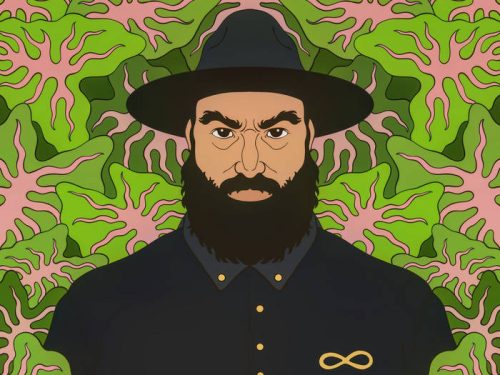 NineFingers is an artist based in Bakersfield CA who is known for performing a wide variety of music in different genres while always bringing his own distinctive voice and viewpoint to the songwriting process. He first started performing back in the early 2000’s as the frontman for the little known indie rock band Winston and the Telescreen which was widely respected for albums like Half of What We Say is Meaningless and Love Amongst Lepers by those few who were actually able to get their hands on them (recently rereleased on Spotify).
He brought Winston and the Telescreen to a halt in 2010 when his spouse fell victim to the opioid epidemic and he found his little family shattered and him left to care for their children while also dealing with his own grief. However he was had difficulty managing it and so his daughters went to live with their grandparents while he tried to pull himself together in a life without both his wife and his music. He soon descended into a life of madness and alcohol abuse until he survived enough misadventures to be convinced to seek psychological care and was diagnosed with both Post Traumatic Stress Disorder and a dissociative disorder. As part of trying to regain control of his mental health he attacked his traumas in a therapeutic exercise called “unpacking” in which he would tell the stories of his traumas over and over again until they’d stopped triggering panic attacks and dissociative episodes. He did this by writing and DIY recording a series of 16 songs with some his friends under the name David T8tz and His Lovely Friends in an album called Pack Thy Secrets Deep, a play of words both on the unpacking process the album was a part of and also a nod to his reality of living with PTSD. After releasing the album quietly and without promotion he tried playing shows in support of it in Los Angeles (where he lived at the time) but found himself constantly breaking down on stage mid song and having panic attacks and occasionally even relapsing into drunken misadventures until he concluded it make little sense to continue playing shows.
He quit music again and moved to Bakersfield CA to be closer to his parents but soon found himself missing the creation of music. However he felt the need to go in a completely new direction as he wanted to rediscover the joy of songwriting instead of dwelling in the depression and fury he lived in every time he picked up his guitar. He decided to learn to become a rapper as he couldn’t think of anything he knew less about and therefore would have the most room to enjoy the learning process (it helped that the last album he’d found truly inspiring was by Kendrick Lamar). After a year of practicing he felt he wasn’t terrible and so he released his first single in 2019 called “Where the Water Meets the Earth Beneath the Sky” a song about his high school sweetheart who he had found himself reconnecting with over the years. He decided to release this song under the name NineFingers, his favorite fictional character from fantasy books, because he wanted to make a statement that he was moving on from writing songs about his ex wife by symbolically severing his ring finger and making the next progression from 8 to 9 (David T8tz to NineFingers).
In 2020 he then released two hip hop EP’s about his current dating life under the names Broken Hearts and False Starts and Quarantine Cuts Vol. 1. However while he was putting together hip hop albums he was hearing other artists songs with the production work of Bakersfield guitarist Kyle Appleton behind them and started to wonder what kinds of things Kyle might add to his older songs which he felt he’d never really given a chance to be heard. He started rerecording his old songs but this time around embracing his natural low baritone of a voice instead of the higher ranges he used to sing in, and then sending them to Kyle. What has resulted is LOOP, a retelling of his stories from an older and hopefully wiser view. Instead of battling with his memories like he was in Pack Thy Secrets Deep, LOOP (releasing 11/15/20) comes from a perspective of acceptance.
Most people would likely find it strange to release hip hop and gothic americana albums in the same year but NineFingers has been long past caring about what other people think he should do.
ninefingersmusic.bandcamp.com