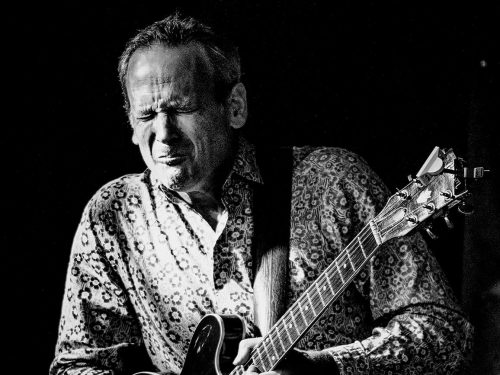 David Landon is one the San Francisco bay area’s premier guitarists and vocalist who has performed nationally and internationally at festivals,concerts and clubs. Throughout his career David has performed with many notable artist including: 80’s pop Star Tiffany, television and Broadway star Mario Cantone as well as multi platinum artist Lenny Williams,Melvin Seals and Deacon Jones. In the studio David has had the pleasure to work with Taj Mahal, Kenny Neal and Adam Duritz of the Counting Crows. David has released 5 solo c.d.s and has played on countless recordings for other artists throughout his musical career spanning over three decades.

For many years David Landon has performed with his original incarnation of searing guitar driven blues rock in the style of his guitar heroes: Hendrix,Clapton,SRV and the 3 Kings: BB, Freddie and Albert. Since 2010 Mr. Landon has come back to his first love of acoustic music and has developed his songwriting and performing to reflect that. As a result his current performances cross multiple musical boundaries ranging from foot stomping blues to more mellow and carefully crafted originals in the singer/songwriter style. Often he will perform an acoustic set and an electric set in the same evening to showcase each style.Mr. Landon’s long standing group is what he considers by far to be his best and most rewarding musical experience and he is delighted to have finally assembled his “dream band” of music industry veterans who share years of experience and a love of making great music. Individually each member is considered a “monster” by fans, critics and fellow musicians alike. Together they bring a truly unique experience to the stage that exemplifies the saying that “the whole is greater than the sum of the parts.” The band is made up of members: Steve Evans on bass, Randy Hayes on drums and vocals and Tony Stead on keyboards and vocals.