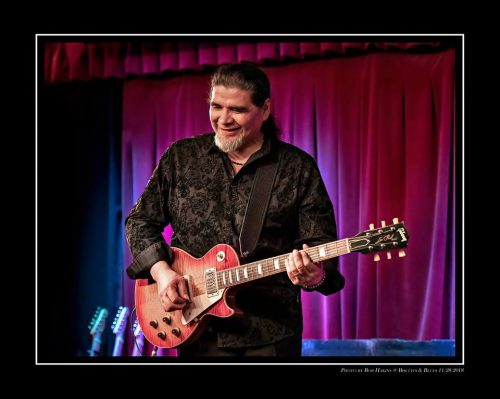 Describing Daniel Castro as a blues artist doesn’t begin to tell the whole story. A highly accomplished guitarist and singer/songwriter with a strong musical point of view grounded in the very best blues traditions is more like it. Combine those talents with original blues-based material and you begin to understand Daniel’s strengths as an artist. Well-known for being a dynamic performer who “leaves it all on the stage” night after night, Daniel brings crowds to their feet with his blistering solos, soulful singing, and tight arrangements. Daniel has always played with seasoned musicians, but with his newest incarnation, the Daniel Castro Band raises the bar and is truly a force to be reckoned with.

Daniel grew up in the L.A. area and was heavily influenced by the blues greats Albert KIng, B.B. King and Albert Collins. As a kid, Daniel would hang outside clubs like the Golden Bear in Huntington Beach to hear these blues legends perform and wait for a glimpse of them through the curtains. After cutting his teeth in South Central L.A. blues clubs with “Mighty Mouth” Delmar Evans, who worked with the Johnny Otis Show, Castro backed other great artists from Otis’ band, including Pee Wee Crayton and Little Ester Phillips. He also recorded and toured with many other artists including legendary Small Faces singer-bassist Ronnie Lane.

Moving to the San Francisco Bay Area in 1995, Daniel formed the Daniel Castro Band and quickly became a hot draw in the burgeoning local blues scene. In 1999, Daniel recorded his first release, No Surrender, followed in 2003 with Live at The Saloon, a double CD recorded at San Francisco’s oldest bar and mecca for the blues faithful. Both CDs highlight the talents of Daniel’s playing, songwriting, and arranging and feature stellar performances by some of the Bay Area’s best sidemen.

Daniel Castro is a great musician and entertainer.” — Elvin Bishop

“Daniel Castro is the latest and one of the greatest blues guitarists to come bursting out of the highly competitive West Coast scene. To the classic music of B.B. King, Albert King, and Albert Collins he has added the three T’s taste, tone, and technique. His raw passion warms your soul while his deep groove kicks your butt on fine, fresh originals and well chosen covers.” Dave Rubin — Guitar Player Magazine “Daniel Castro is one of the most dynamic blues guitarists performing in the West Coast.” –Willie Brown, President, Sacramento Blues Society