Buddy Guy – The Last Godfather of the Chicago Blues 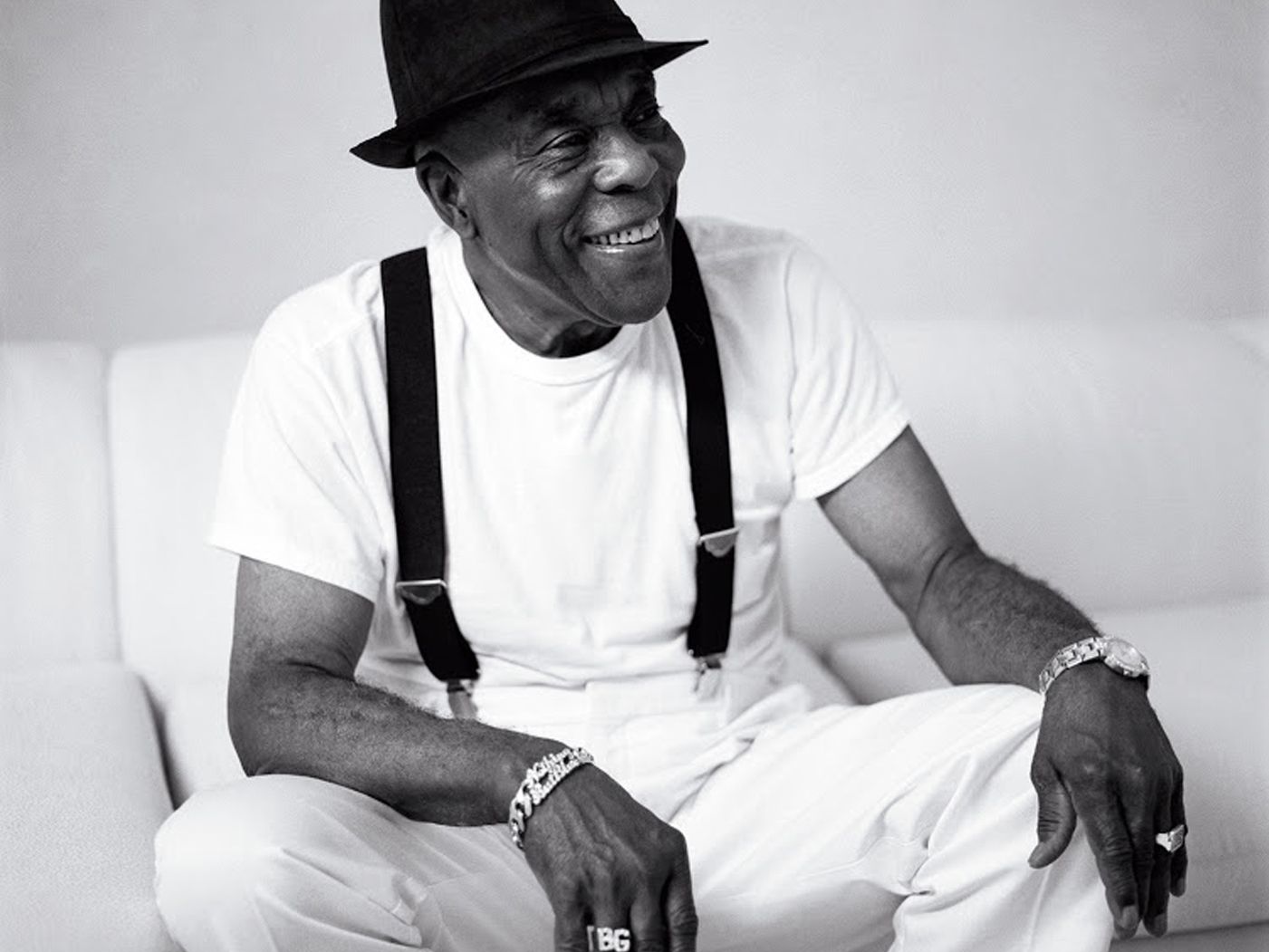 According to Eric Clapton, John Mayer, and the late Stevie Ray Vaughn, Buddy Guy is the greatest blues guitarist of all time. An enormous influence on these musicians as well as Jimi Hendrix, Jimmy Page, and Jeff Beck, he is the living embodiment of Chicago blues.

“He just blew my head off,” says Jeff Beck, who saw Guy on his first English tour in the mid-Sixties.

When Clapton saw Guy in 1965, he remembered, “I wanted to do what he was doing — a blues trio! I would be the slick frontman, a white Buddy Guy.”

Though Buddy Guy will forever be associated with Chicago, his story actually begins in Louisiana. One of five children, he was born in 1936 to a sharecropper’s family and raised on a plantation near the small town of Lettsworth, located some 140 miles northwest of New Orleans. Buddy was just seven years old when he fashioned his first makeshift “guitar” a two-string contraption attached to a piece of wood and secured with his mother’s hairpins.

Guy graduated to an acoustic guitar, and began soaking up the influences of blues players such as T-Bone Walker, B.B. King, and Lightnin’ Hopkins; as his family relocated to Baton Rouge, Guy had the opportunity to see live performances by Lightnin’ Slim (aka Otis Hicks) and Guitar Slim, whose raw, forceful sound and over the top showmanship left a serious impression on.He was transfixed not only by Slims’ playing and singing, but also by his showmanship and talent for entertaining crowds. Guy, who admits he wanted to be Guitar Slim, emulated his early idol by standing up while he played and getting his own 150-foot cord, which Slim also pioneered.

“I saw the late Guitar Slim play when I was still very young” – Guy recalls and continues –  “That was the first time I saw a Strat. He had a 100-foot cord coming in the door, playing “I Done Got Old.” And I’m saying, “Is that a guitar? What the hell is that?” Later on, I played with a guy named Big Poppa [Tilley]. He had a little three-piece band, two guitars and drums, and he played a little harmonica. And he bought a Strat for me to play in his band.

That was the first time I got to play one. When I first came to Chicago, I had a Gibson Les Paul, but I was so in love with the Strat. So when the Les Paul got stolen, I got my first Strat, a ’57. One reason why I fell in love with the Strat back then was that acoustics and other guitars weren’t built so solid. If something happened, they could crack easy and all of that. Back then I couldn’t afford a new guitar if something happened to mine.

And I found out the Strat has a steel rod in the neck and it was a solid piece of wood, so if you drop it you might scratch it, but you couldn’t hurt it. That’s what made me fall in love with it. Plus, Leo Fender had that tone and that sound on it, man. So I got hooked with that experience.

In 1957, Guy moved to Chicago to look for better-paying work, but not before cutting a demo at a local radio station. He packed the reel-to-reel tape along with the upgrade from his Harmony acoustic – a Gibson Les Paul. One night, the shy country boy got to sit in with Otis Rush, playing Guitar Slim’s “Things That I Used To Do,” when, he writes, “The spirit of Guitar Slim entered my soul.”

He signed with Chess, Chicago’s premier label, in 1960, and his first session produced the harrowing ‘First Time I Met The Blues’. He scored a rhythm and blues hit with ‘Stone Crazy’ in 1962, but most of his own recordings remained unreleased (possibly due to internecine politics), although he appeared on countless records by Muddy Waters, Willie Dixon, Little Walter, Sonny Boy Williamson II and Koko Taylor. His first British visit in 1965 with the American Folk Blues Festival launched his prestigious fan club.

They told me I was just making noise. Until the British guys got it. Then Leonard Chess came back and said, “We fucked up. We should have cut you loose, because people are eating it up.” I said, “I kept trying to tell you that.”

I wanted that amplifier wide open before the British got it. I went to England in February of 1965, and Eric wasn’t famous and Jeff  wasn’t famous. But every time they’d see me, they’d say they slept in a van to come see me play, because most of my stuff had come from playing behind Sonny Boy, Muddy, and Junior.

In the 1970s and ’80s Guy continued to record and performed often with blues harmonica player Junior Wells, but he fell victim to the growing popularity of rock music. It was not until younger white musicians—among them Eric Clapton, Stevie Ray Vaughn, Keith Richards, and Jeff Beck—acknowledged their debt to Guy and other bluesmen that his fortunes again began to rise. He made several Grammy-winning albums in the 1990s, including Damn Right, I’ve Got the Blues (1991), Feels Like Rain (1993), and Slippin’ In (1994). In 2003 Guy released his first acoustic blues recording, Blues Singer, and he won additional Grammys for his albums Living Proof (2010) and Born to Play Guitar (2015). In 2012 he was named a Kennedy Center honoree, and in 2015 he received a lifetime achievement award from the Recording Academy.

“I didn’t record for most of the ’80s because I hadn’t had my freedom,” Guy said just after Damn Right was completed. “Now I’ve finally got the freedom I’ve been wanting for 30 years and more. And I’m just cutting loose.”

The diminishing popularity graph slowly witnessed a revival during the late 1980s and early 1990s. His 1989 initiated blues club, Buddy Guy’s Legend, which became a favorite hangout joint for blues musicians. Later on, he accepted the proposal of Eric Clapton to perform onstage at the London’s Royal Albert Hall during the guitarist’s multi-night run in 1990-91 which sparked off positively for him. That exposure led to a new recording contract. Damn Right, I’ve Got the Blues was the first of many albums on the Silvertone label and ignited a full-blown renaissance that made Guy the preeminent blues guitarist of the Nineties. In fact, Damn Right, I’ve Got the Blues became that rarity: a blues album that sold well enough to earn a gold record (500,000 copies sold). The star-studded album included cameos by such acolytes as Eric Clapton, Jeff Beck and Mark Knopfler.

The Future and The Roots

“I worry a lot about the legacy of Muddy, Wolf, and all the guys who created this stuff,”

he says. “I want people to remember them. It’s like the Ford car—Henry Ford invented the Ford car, and regardless how much technology they got on them now, you still have that little sign that says ‘Ford’ on the front.if you never tasted it, you wouldn’t love it. That’s what’s happening with the blues. Now, the young people don’t know nothing about it unless — I know satellite [radio] do play blues, but we need more than that. I tell everybody I would love to hear Muddy Waters twice a week. I’m not telling you to play him all day, all night; just play him. Let the young people know where it all started.

“You owe people the best that you got,”

Guy says. “If I keep living and can’t produce enough to make somebody happy, then I’ll begin to feel that I’m not giving you your money’s worth. So that’s crossed my mind. But people look at you as you get like that and say, ‘I don’t care, I just want to see you play the guitar.’”

Yet despite this long list of achievements, Buddy Guy and his music remain as vital as ever. In 2008 Buddy appeared on the big screen nationwide with a show-stopping performance in Martin Scorsese’s Rolling Stones concert film, Shine A Light. At the age of 72, he appeared on the cover of Rolling Stone for the first time, as part of the magazine’s “100 Greatest Guitar Songs” package (his cataclysmic 1961 recording of “Stone Crazy” made the list).

In matters of blues history, Buddy possesses a ready and vivid memory. He seems to feel the bitterness of each rip-off and the glory of each musical triumph as if they happened yesterday. As he reflects on some of his greatest recordings, from the late Fifties to the present day, the recollections come flooding back, infusing the hallowed grooves with the living truth they call “the blues.”