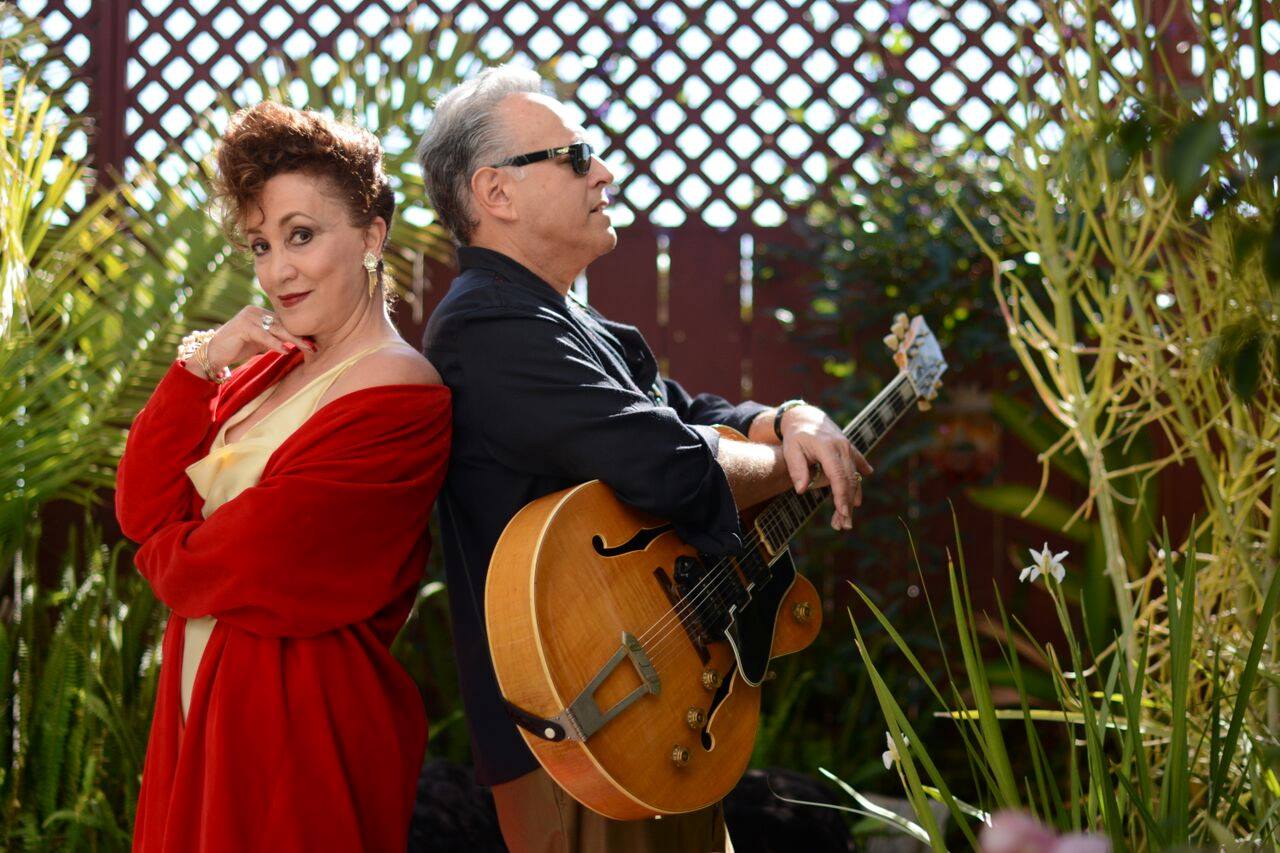 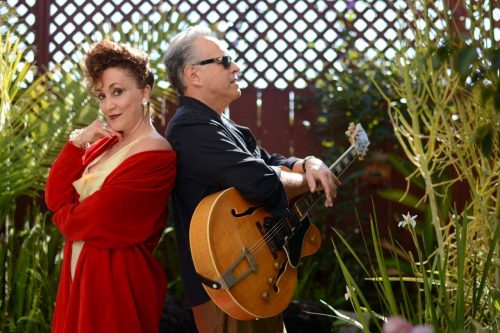 Blue Largo was formed by guitarist Eric Lieberman and vocalist Alicia Aragon in 1999. Eric has been a fixture on the Southern California blues scene since 1981, when he began his four year stint with San Diego’s now legendary King Biscuit Blues Band. He then went on to form The Rhumboogies, which featured vocalist Earl Thomas, and subsequently The Juke Stompers. As part of the Southern California blues community during the 1980’s, Eric became closely associated with The Paladins, The James Harman Band, Hollywood Fats, Kid Ramos and Junior Watson. He was even lucky enough to play a gig with Hollywood Fats at the Belly Up Tavern in Solana Beach, California, just two weeks shy of Fats’ untimely and sudden death. Both The Rhumboogies and The Juke Stompers have shared bills with B.B. King, Clarence Gatemouth Brown, Hank Ballard & The Midnighters, Little Charlie and The Nightcats, Anson Funderburgh & The Rockets, The Paladins and The James Harman Band. And two of Eric’s greatest disciples, Robby Eason and Nathan James, both went on to play guitar for James Harman in the nineties and 2000’s. In addition to Robby and Nathan, pretty much any blues musician who has lived in San Diego at any time from 1981 to the present, regardless of what instrument they play, will attest to Eric’s major influence on the San Diego music community for almost the past four decades.

In November 2006, Eric developed a neurological condition known as Focal Dystonia, which caused him to lose coordination in his right hand. He probably should have stopped playing altogether at that point, as he could barley even play in time. If he could hold onto a pick at all, it was as if it was attached to a rubber band. But playing guitar is an addiction for Eric, and he couldn’t force himself to stop, just as most addicts can’t force themselves to stop whatever their addition is. So, he kept the band going, playing mostly small local gigs, while doing everything possible to overcome his Focal Dystonia, including learning to read Braille and taking formal piano lessons. The idea here is to learn new tasks, using the affected parts of the body, in order to create new neurotransmitters, which hopefully replace the damaged neurotransmitters that are causing the dystonia. Because Eric tried such a multitude of remedies to help him conquer his dystonia, it is difficult to know which were the most effective. But he believes that if it was any one specific thing, it was spending approximately five hours a day for over eleven years, retraining himself how to play, one note at a time, without the dystonic, spasmodic hand motions. And while he’s still not one hundred percent free of his dystonia, he’s about ninety five percent back to normal, and still spending those five hours a day working towards getting back to a hundred percent.

Because of Eric’s condition, Blue Largo didn’t record another record for fifteen years, from 2003 to 2015. But by 2015, with Alicia’s encouragement, he became convinced that he was healed enough to once again commit something to tape, and the result is the band’s third album, Sing Your Own Song. Up until this time, Blue Largo has always been a traditional 1940’s / ‘50’s era blues band, specializing in covers by such artists as Billie Holiday, Dinah Washington, Louis Jordan, T Bone Walker and Julia Lee. But Eric started jotting down some song ides of his own over the years, which he and Alicia revisited when they decided to record  this new record, and lo and behold, Sing Your Own Song contains seven original songs, dealing with life’s big issues…….. confronting challenges, despair, hope, perseverance, and ultimately prevailing! Music wise, the record contains everything from gospel to Louisiana swamp grooves, 1960’s rhythm and blues, jump blues, sensual ballads and lowdown acoustic country blues. And as a result of the spark that this new record gave Blue Largo, the band played the Gator By The Bay Festival in 2016 and 2018, and both The Baja Blues Festival in Rosarito Beach, Mexico, and The San Diego Blues Festival in 2017. 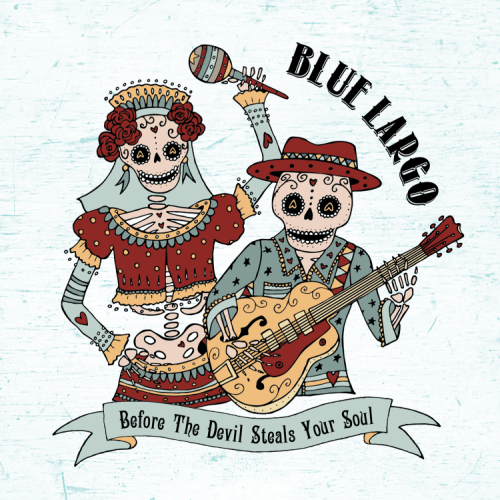 Blue Largo has now completed its fourth album, Before The Devil Steals Your Soul, scheduled for release on October 19, 2018. Believing Devil to be the band’s strongest and most creative record yet, it contains ten original songs, as well as Nina Simone’s Feeling Good, Jimmy Ruffin’s What Becomes Of The Brokenhearted, Nat Adderley’s Work Song, and a mambo guitar instrumental entitled Bodas De Oro, which pays tribute to the great Cuban guitarist, Manuel Galban. As for the original compositions on Devil, once again Eric chooses to write in his own voice, addressing life’s big issues, such as the political and social state of our country in Wash Away and Same Race, the loss a loved one to terminal illness in The Long Goodbye, and the need to live our lives to the fullest, in truth and righteousness, before it’s too late, in Before The Devil Steals Your Soul. If I Can Make It To Augusta is a tribute to all the musicians who have been out there paying their dues on the road for decades, and who now wish to settle down to a more serene, peaceful life at home. Monrovia is the first song Eric has written as a fictional story, the theme being betrayal of love, infidelity, jealousy and ultimately murder. For its musical ambience Eric was channeling a Quentin Tarantino or Ennio Morricone Spaghetti Western soundtrack. And finally, I’m Alive addresses the incredible inspirational healing power of music itself!

With the completely organic and unforced stylistic change from playing vintage blues covers to writing its own original material, Blue Largo now likes to think of its music as “Original Vintage Rhythm and Blues.” The songs are definitely original, and Eric just lets them come to him as they do. He doesn’t intentionally try to write in anyone’s voice other than his own. He most certainly doesn’t try to write in the voice of some African American blues artist from the 1940’s or ‘50’s, because in spite of his great love and respect for that music, it is not his music, nor does it reflect the life and times in which he grew up. In spite of dedicating the better part of his adult life to studying and paying tribute to the blues of the 1940’s and ‘50’s, it only makes sense that the songs which come out of Eric are much more evocative of the rhythm and blues and soul music from the 1960’s, that he came of age hearing on his parents’ car radio. And in the end, because Eric, Alicia and all of Blue Largo’s musicians have been so genuinely steeped in vintage blues for so many decades, Sing Your Own Song and Before The Devil Steals Your Soul can’t help but to capture and evoke the essence of that sound and vibe, without even trying.