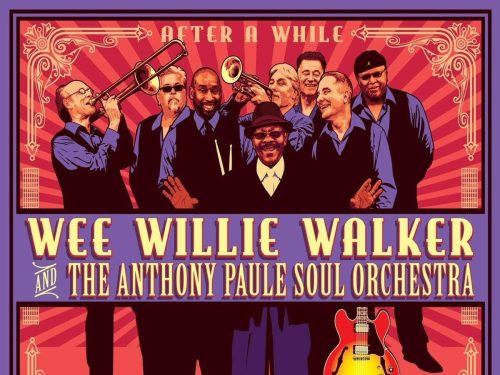 Thetwelve-piece Wee Willie Walker & The Anthony Paule Soul Orchestra epitomize the time-honored, authentic spirit of American Soul Music. They met and made their debut public appearance at the perpetually revered Porretta Soul Festival 2015, in Porretta, Italy. Inspired by the magic and power of that show, they knew they had to continue performing together.

Wee Willie Walker is the septuagenarian soul singer whose recordings go back to the Goldwax label out of Memphis in the late 1960s. In 2015 he recorded If Nothing Ever Changes (LVF), and in 2016 Live! Notodden Blues Festival(LVF). Both releases were well received by critics and fans alike.However it’s 77 year old Willie’s most recent release on Blue Dot Records, After A While, with the powerhouse Anthony Paule Soul Orchestra from San Francisco, that has put him back on the map. Together they work magic on a 58-minute-plus recording of eight originals and five covers that compellingly recreate the sensational sounds of the blues, R&B, and soul from the prime era of the ’50s to the ’70s. This record earned Wee Willie Walker and the Anthony Paule Soul Orchestra’s five 2018 Blues Music Award nominations, a feature in Downbeat Magazine (2/2018), and a feature in The San Francisco Chronicle (3/2018). After A While hit # 7 on Downbeat Magazine’s, 2018 critics poll; and Wee Willie Walker was awarded Most Outstanding Male Blues Singer, 2018 by Living Blues Magazine. Walker’s voice is nothing shy of a soul-defining epiphany. You can hear passion, peace, love and pain in each spellbinding phrase. With considerable beauty, depth and richness, Willie subtly coaxes the listener’s ear through a range of heart-melting emotions.emotions one usually feels only when in love. You’ll get goosebumps, if you dare. Can it get any better than this? No! Expect to drop your jaw in awe of this exhilarating, authentic, twelve-piece soul music extravaganza, as they tempt you through and deliver the promise of one self-penned new soul classic after another…