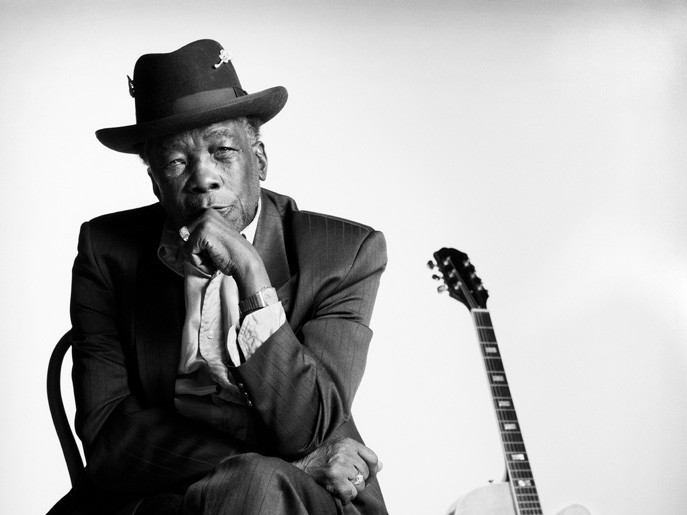 The original boogie man, John Lee Hooker (1917–2001) sustained a career of more than 50 years with his incessant one-chord stomp and half-spoken vocal style. But behind the captivating, hypnotic rhythm Hooker found his own deep blues – one with dark tones and mysterious flurries of notes – as he groped to express, often with a wicked irony, his own feelings of pain and desire.

From the Delta to Detroit

Like so many of the greats, John Lee was born in the Delta around Clarksdale, Mississippi in 1917, although the date and location are sometimes disputed.As a teenager, he ran away to become a musician. ”I was young and had a lot of nerve,” he said in an interview with David S. Rotenstein. ”I knew I would get nowhere down in Mississippi and I ran away by night. I thought for sure I was gonna make it.” Mr. Hooker made his way to Memphis, where he worked as an usher in the segregated W. C. Handy movie theater on Beale Street. He soaked up more blues playing with musicians like Robert Nighthawk before heading farther north. In Cincinnati at the end of the 1930’s, he sang with gospel groups, including the Fairfield Four and the Big Six, and in 1943 he moved to Detroit. There, he worked in steel and automobile factories and played in the blues clubs.

It was T-Bone Walker, who gave Hooker his first electric guitar, an Epiphone. “I was already established but not electrified. I still have that old Epiphone that T-Bone laid on me back in Detroit… Playin’ music, I really got into it big when I hit Detroit,” he said. “A lot of work was goin’ on… wartime, World War II and the factories were goin’ and every city was boomin’. Detroit was boomin’.”

Mr. Hooker’s music stayed close to its Mississippi Delta roots. Usually playing an electric guitar with a menacing hint of distortion, he picked barbed, syncopated guitar riffs that went on to become cornerstones of rock. Electrified for tough urban crowds, they harked back to the rural South and to West Africa. ”I don’t play a lot of fancy guitar,” he once told an interviewer.

”The kind of guitar I want to play is mean, mean, mean licks.”

And with his deep, implacable voice, he sang of lust and loneliness, rage and despair in songs so bleak that they sometimes made him cry behind his dark glasses.
Mr. Hooker’s songs stoked the blues-rock of the 1960’s. They were picked up by English and American rockers, among them the Rolling Stones, Canned Heat, the Animals and, later, Z Z Top and George Thorogood and the Destroyers. Mr. Hooker estimated that he recorded more than 100 albums, and he toured everywhere from juke joints to concert halls.

“Every song I sing is something that happened to my life or somebody else’s life. That’s why everybody digs the blues… it has more feeling than other music. When I sing these songs I feel them down deep and reach you down deep.”

Chances are the stop time hook and eternal riff of “Boom Boom” are familiar to anyone with ears. With a slew of Motown session musicians playing on the recording, “Boom Boom” is still an enticing alloy of blues, early funk and folk. One thing that John Lee Hooker knew how to do well was to keep current with music of the times, fusing his unique playing and singing with what was coming to light out around him.

Hooker continued to perform and record through the Seventies and Eighties, though 1989 marked a turning point. The Healer was Santana’s Supernatural ten years ahead of its time. With a guest list that included Los Lobos, George Thorogood, Bonnie Raitt and Carlos Santana, Hooker’s public profile raised again, and his collaboration with Raitt on “In the Mood” earned him his first Grammy award. It would be the first of four Grammys that Hooker would win over the next decade, marking a period of increased productivity for Hooker that included another star-studded album with 1991’s Mr. Lucky, which featured songs with Keith Richards and Van Morrison.

Hooker says, speaking in the gravelly mumble that has become as much a signature of his music as his stomping right foot. “I just do what I want.”

The Hook didn’t just disapprove of rehearsals — he would rather they didn’t exist at all. His long time guitarist, Mike Osborn, would rehearse the band without Hooker being present. It was almost always the same show, and Mr. Hooker felt that anyone who couldn’t play Hooker’s music spontaneously… shouldn’t be playing at all.

Playing fingerstyle mostly on semi-hollowbody electrics, Hooker’s music was raw and primal – often just guitar and voice, the artist tapping out the beat with his foot and rhythmic chugs on the strings. “Whistlin’ And Moanin’ Blues” has no lyrics, but is gripping nonetheless. Hooker was a great whistler, no doubt, but dig those just- overdriven guitar licks, deep in the modal-blues universe. Every guitarist should mentally connect John Lee’s riffs here with what Jimi Hendrix was doing on “Voodoo Chile” almost 30 years later. You can almost draw a straight line from Hooker to Hendrix.

Hooker rarely played on a standard beat, but changed tempo and omitted bars to fit the needs of the song. Also, his sense of chording was more modal than traditional. This made it nearly impossible to add backing tracks, and even live musicians often found it difficult to follow Hooker’s lead. Hooker’s deep, plaintiff voice was unmatched in its dark tonalities. His vocal phrasing was less closely tied to specific bars than most blues singers. This casual, rambling style had been gradually diminishing with the onset of electric blues bands from Chicago, but even when not playing solo, Hooker retained it. Although he lived in Detroit during most his career, he is not associated with the Chicago-style blues prevalent in large northern cities, as much as he is with the southern blues styles, known as “delta blues,” although his driving beat and powerfully recorded toe-tapping gave him a definite urban feel. His use of an electric guitar tied together the delta blues with the emerging post-war electric blues.

His songs have been covered by The Doors, Led Zeppelin, The Yardbirds, The Animals, R.L. Burnside, The Jon Spencer Blues Explosion and many others. Contemporary blues greats who have paid tribute to him include Eric Clapton, Bonnie Raitt, Robert Cray, Ry Cooder and Carlos Santana. Indeed, there is hardly an exponent of the blues alive today that does not acknowledge a debt to Hooker.