Aretha Franklin – The Queen of Soul 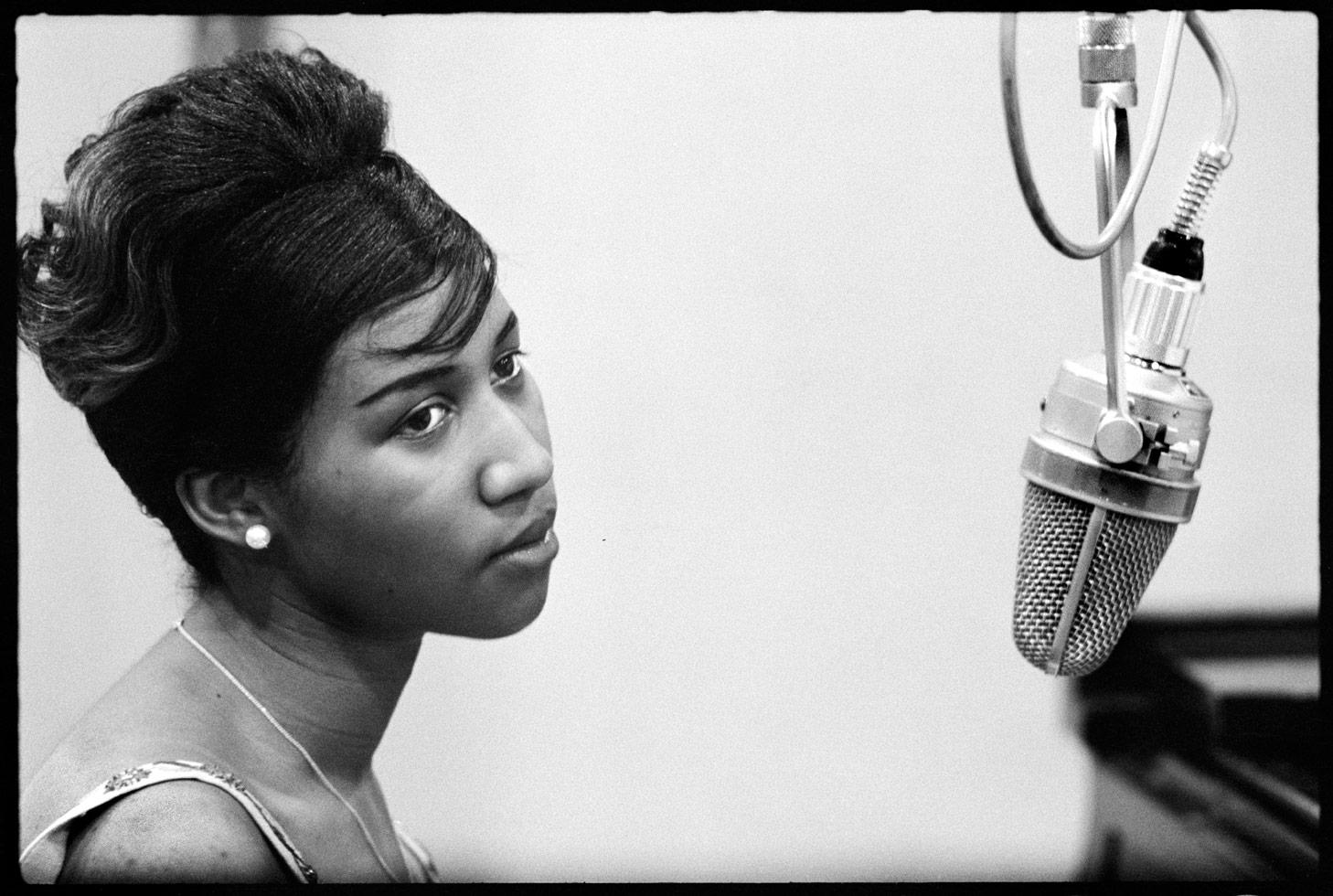 Known as the Queen of Soul, she was born into true American royalty as the daughter of one of the most celebrated of the nation’s black Baptist preachers, the Rev CL Franklin, and his wife, Barbara, a nurse’s aide and a singer and choirmistress in her husband’s church.

The preacher’s offspring grew up thoroughly steeped in the sung and spoken cadences of the gospel, in churches where smelling salts were always at hand to revive those overcome by spiritual possession. “Like my father,” Aretha wrote in her autobiography, From These Roots (1999), “the church always gave me a special kind of love.”

Rejecting formal keyboard lessons as a child, she learned to play by ear and mastered the techniques of gospel piano. She was also falling under the spell of rhythm and blues. Her friends and neighbours in Detroit included Berry Gordy Jr and Smokey Robinson, later to found the Motown label; another future Motown star, Marvin Gaye, dated her older sister. But it was a newly arrived music director at her father’s church, James Cleveland, who, although barely out of his teens himself, helped to focus her early career as a gospel singer.

Giving up formal education after the birth of her second child, she travelled extensively as a featured member of her father’s troupe. Her first album, recorded in churches across America, displayed the girl’s astonishing range, precocious control and blazing fervour. Seeing her potential, influential friends including Gordy and the singer Sam Cooke tried to lure her over to the secular side. In New York she recorded a demo tape that found its way to John Hammond, probably the pre-eminent talent scout of the century, whose proteges already numbered Smith, Count Basie, Benny Goodman and Billie Holiday (and would later include Bob Dylan and Bruce Springsteen).

When, in 1967, she got hold of Otis Redding’s song Respect, originally a man’s urgent but politely phrased request for harmony in his home, she transformed it into a demand for equal rights on behalf of all women.

The girl in question was 25-year-old Aretha Franklin and the song was ‘Respect’, Redding’s 1966 composition. Aretha’s magnificent interpretation of his tune was, of course, much more than an intriguing cover version, it was an almighty appropriation, a downright musical heist. From that very moment, the song was always identified with Franklin, not poor Otis.

Aretha’s performance on this funky Southern soul track epitomised her extraordinary vocal prowess. Radiating sassy confidence and gospel fire, she burnt a sanctified path through this secular song, famously whooping, “R.E.S.P.E.C.T. – find out what that means to me!” One of the great recordings of the last 50 years, it became a million-selling smash and was also embraced as a black female anthem. Some perceived it as an appeal for racial deference.

An R&B and pop number one, ‘Respect’ detonated Aretha Franklin’s career skywards. Over the next seven years, with songs like ‘Chain Of Fools’, ‘Think’, ‘Spanish Harlem’, ‘Rock Steady’ and ‘I Say A Little Prayer’, she was consistently hitting the R&B and pop top ten. In fact, seventeen leapt to the number one R&B spot.

“I took her to the church, sat her down at the piano and let her be herself.”

Intent on emphasizing the gospel roots of her voice, he opted to record her, not in New York, but in a funky, organic Southern context at Rick Hall’s Fame studio. This was in Muscle Shoals, Alabama, where some of the finest Southern R&B session musicians worked.

Allegedly, that day afew of the Muscle Shoals Rhythm Section were lazing around the studio, unaware of her reputation. One of the musicians, Dan Penn, who composed ‘Do Right Woman – Do Right Man’ for Aretha’s Atlantic debut, yelled at them, “You better get your damn shoes on, you’re getting someone who can sing!” They didn’t bother to move until Aretha finally entered the studio. Walking over to the piano, she hit a “magic chord.” In a second, the lounging musicians were “like little bees buzzing around the queen”. In fact, it was session keyboardist Spooner Oldham who generously suggested Aretha continue playing piano during the recording whilst he move to the Wurlitzer electric piano and organ. Thankfully, this set a precedent for all of Aretha’s future recordings with Jerry Wexler.

“inside every woman there’s an Aretha Franklin screaming to get out.”

Indeed, it was the combination of her vocal gymnastics, fantastic songs and charisma – sometimes sweet, sometimes sassy – that created her crossover appeal. Importantly, she always seemed accessible, a confident, principled woman battling with difficulties and afew insecurities. Certainly, her eight-year marriage to manager Ted White, whom she bore a son, Teddy Jr., was often nightmarish. She also suffered from a debilitating fear of flying and struggled with her weight.

Aretha’s incredible run of late ’60s Atlantic classics flowed into the early 1970s. Tracks like ‘Spanish Harlem’, ‘Bridge Over Troubled Water’ and ‘Until You Come Back To Me’ were all substantial pop and R&B hits. She also continued recording consummate albums, like ‘This Girl’s In Love With You’ and ‘Young, Gifted And Black’, mostly sticking to the eclectic blueprint of inspired covers and originals. Two of her most exceptional albums of this time were a couple of live recordings – Fillmore West and Amazing Grace.

Ms. Franklin with her Grammy Award in 1975. She won the Grammy for best female R&B performance every year from 1968 through 1975, and in her career she received 18 competitive Grammys, as well as a lifetime achievement award in 1994.CreditAssociated Press

In 1979, Aretha switched from Atlantic to Arista and performed an engaging cameo in the Blues Brothers. Like James Brown, another soul star featured in the film, it helped restart her languishing career. But, although she recorded throughout the ’80s, ’90s and into the ’00s, Aretha never again achieved the kind of stardom she experienced in the late ’60s and early ’70s. With 1985’s ‘Who’s Zoomin’ Who’ and ‘Freeway Of Love’, she achieved her biggest hits for 11 years. Aretha also recorded a number of duets with the likes of James Brown, Whitney Houston, Annie Lennox and George Michael. With the latter, she hit the number one spot in 1987 on both sides of the Atlantic with ‘I Knew You Were Waiting (For Me)’. The same year, she cut her third gospel album One Lord, One Faith, One Baptism, recorded at her now deceased father’s Baptist church. For 1998’s A Rose Is Still Is A Rose and 2003’s So Damn Happy Aretha collaborated with artists from the hip hop world, including Lauryn Hill, Puff Daddy and Mary J. Blige.

Despite her less inspired, more pop-orientated work during these years, the reverence for her talent never faltered. In 1987, Aretha was the first woman to be inducted into the Rock and Roll Hall Of Fame. In the 1995, she was presented with a Grammy Lifetime Achievement award. She also sang at President Clinton’s inauguration. At the Millenium, Aretha was asked by a White House committee to include one of her songs in the official time capsule of US cultural artifacts. She chose ‘Respect’.

In March, 2004, a month after she performed at the 50th anniversary party for the Four Tops and scooped yet another Grammy for ‘Wonderful’, Aretha was hospitalized after her blood-platelet count dropped. Reports speculated her high blood pressure, weight and hectic schedule all contributed to this.

“Nobody embodies more fully the connection between the African-American spiritual, the blues, R&B, rock ’n’ roll—the way that hardship and sorrow were transformed into something full of beauty and vitality and hope,” President Obama told Remnick in 2016.

She will ultimately be remembered for her amazing, transcendent voice – full of joy, sweetness and soul. It affected a huge number of people. Aretha herself once explained, “If a song’s about something I’ve experienced or that I could’ve happened to me, it’s good. I look for something meaningful. When I go into the studio, I put everything into it.